Nectar of the Gods – Honeywine and Mead

Honeywine, Mead, the Nectar of the Gods, is made of Honey and Water, 1 part honey, 2 parts water. It’s allowed to add flavours, herbs and fruitjuices. In Poland mixtures of fruit and honeywines were very popular. These beverages are known as Melomels. Apple based Meads are called Cyser and Grape Based meads are called Pyment. But there are many others. In Slovakia Mead is still very popular, it’s called medovina.

Mead was not only produced in the high north by wikings and norsemen but also in Greek, Asia, Africa and other parts of the World. In England, Germany and Austria some old recipes from monasteries exist which prolong the usage of herbs like pyment, hops, cinnamon, nutmeg, clove and ginger. Spiced mead is called Metheglin.

Mead is often a very sweet and heavy drink comparable to sherry or vinsanto with up to 16%Vol. but there exist sweet and dry variants as well as coolers, sparkling wines and mixed beverages with beer and mead.

Mead is one of the oldest alcoholic beverages. What makes the production difficult is the long fermentation because honeywater lacks trub and nutrients for fermentation and honeywater means high osmotic stress for yeast.

Did you know – traditionally mead was offered at weddings and that’s the origin of the word Honeymoon.

In Africa, Ethiopia, mead is still popular. They call it Tej. See how it’s made there. 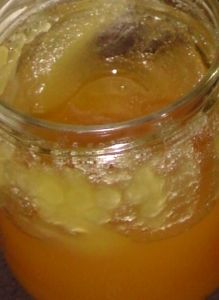 Nowadays new technologies are used in meaderies. The classic batch fermentation is replaced by fed-batch and column reactor processes with a continuous feed of prepared and pasteurized honeywater and immobilized yeast.

Here is an example from Maine Mead Works